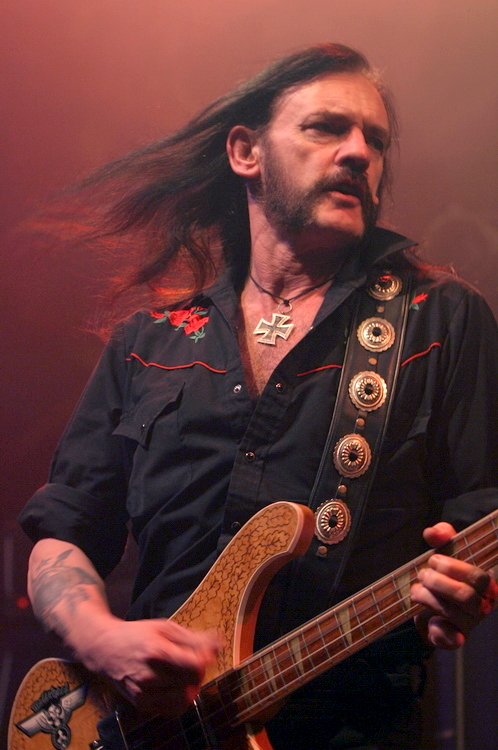 Ian Fraser Kilmister (24 December 1945 – 28 December 2015), better known as Lemmy, was a British singer, songwriter, and musician. He is best known as the founder, lead singer, bassist, primary songwriter and only continuous member of the British rock band Motörhead.

A foundational force in the genre following the advent of the new wave of British heavy metal, he was known for his appearance, which included his signature friendly mutton chops, his military-influenced fashion sense, and his gravelly rasp of a voice that was once declared "one of the most recognisable voices in rock". He was also noted for his unique way of singing, which was once described as "looking up towards a towering microphone tilted down into his weather-beaten face". He was also known for his bass playing style and using his Rickenbacker bass to create an "overpowered, distorted rhythmic rumble", while another notable aspect of his bass sound was that he often played power chords using heavily overdriven tube stacks by Marshall.

Lemmy was born in Stoke-on-Trent and grew up between there, the nearby towns of Newcastle-under-Lyme and Madeley, and later the Welsh village of Benllech. He was influenced by rock and roll and the early works of the Beatles, which led to him playing in several rock groups in the 1960s such as the Rockin' Vickers. He worked as a roadie for Jimi Hendrix and The Nice before joining the space rock band Hawkwind in 1971, singing lead vocals on their hit "Silver Machine". In 1975, he was fired from Hawkwind after an arrest for drug possession; that same year, he became the founder, lead singer, bassist, and songwriter of Motörhead. The band's success peaked around 1980 and 1981, including the hit single "Ace of Spades" and the chart-topping live album ''No Sleep 'til Hammersmith''.

Lemmy continued to record and tour regularly with Motörhead until his death on 28 December 2015 in Los Angeles, where he had lived since 1990. He was diagnosed with prostate cancer two days before his death. Alongside his music career, he had minor roles and cameos in film and television. He was known for his hard-living lifestyle, which included chain-smoking and daily consumption of large amounts of alcohol and amphetamines. Provided by Wikipedia
Showing 1 - 3 of 3 for search: 'Lemmy, 1945-2015', query time: 0.03s
List  Tabulka
Search Tools: Get RSS Feed — Email this Search —